Hybrid picking is an advanced technique that requires using both your pick and your fingers to play notes. This style of playing has a unique sound, the notes you play with a pick with have more attack and brightness and the notes you play with your fingers will have a warmer, woodier tone. The combination of these tones has been used many times over the years by everyone from country to blues to rock players. 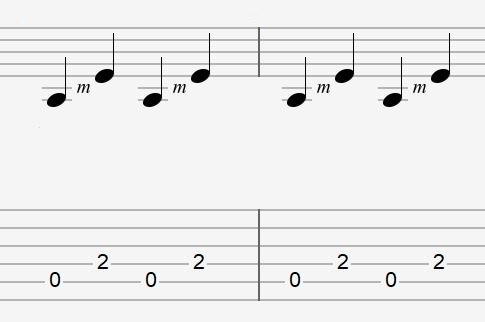 The best place to start with hybrid picking is to start off getting a feel for the mix of pick and finger playing. Let’s take a A5 chord and alternate between picking the bass note with the plectrum and the fretted note with the middle finger of the picking hand. This is indicated on the stave with an “m” right before the note in question. This exercise is straight quarter notes to allow you to get the feel for the technique. 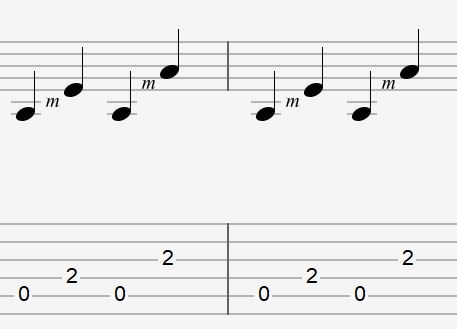 Sticking with the straight quarter notes but now we are alternating our middle finger between the D and G strings on the 2 and 4 beats. Exactly the same principal as the previous exercise but with the additional crossing between strings. Alternatively, you could play the notes on the G string with your ring finger. This would be notated on the stave with an “A” instead of an “M”. 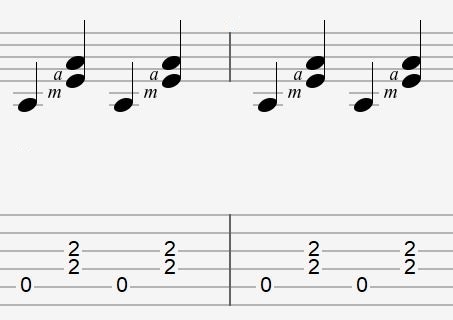 Hybrid picking becomes more challenging when you start using multiple fingers on the picking hand at the same time. In this exercise we will still be playing the open A string with the plectrum on the 1 and 3 beats. On the 2 and 4 you will be using your fingers to pick the 2nd fret on the D string and the the 2nd fret on the G string simultaneously. To achieve this, you will need to use your middle finger for the D and your ring finger for the G. This is marked on the stave with an “M” for middle and “A” for ring finger. If you have never tried this technique before, it might feel a little alien at first. Take your time to ensure that the finger picked notes have the same volume as the plectrum hits, unless of course you are playing with an accent on a note. 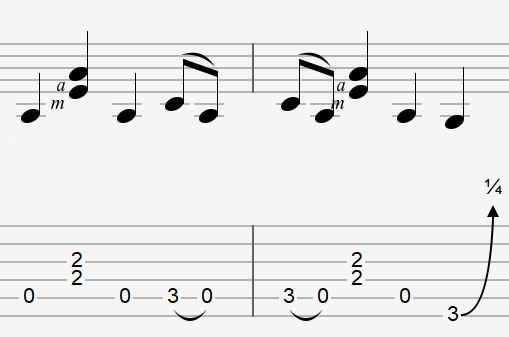 Now that you’ve learned the technique of hybrid picking, it’s time to put it into a simple riff. The riff is straight quarter notes for both bars, except the 4th beat of the first bar and the 1st beat of the second bar. This is two eighth notes doing a pull off from the 3rd fret of the A string to the open A.

So the timing of this riff would be:

The finger picked note falls on the second beat of each bar, all other notes are played with the pick. When putting hybrid picking into riffs it’s best to start slow to ensure the timing of each note lines up with the beat and that the volume between pick and fingers is consistent.

As with the study piece from the grade book, we can also integrate rests into our hybrid picking to give a choppy feel to some of the passages. In this exercise we are splitting both bars into straight eighth notes. In the first bar the finger picked parts fall on beat 2 and the “&” of the third beat. On the third beat there is an eighth note rest.

The amount of pull offs and additional single notes makes this exercise a challenge.

The second bar starts with a rest so the first thing we play is the finger picked double stop on the “&” of the 1 beat. The second beat is the same pull off we saw in the first bar. The third beat starts with the finger picked double stop again but then goes into the pull off. This pull off actually crosses between the beats, the initial picked note is on the “&” of the 3 but the open A that you pull off to lands on the start of the 4 beat. The bar then ends with a quarter tone bend on the 3rd fret of the E string on the “&” of the 4 beat.

Hybrid picking is a technique that takes a lot of practice and patience. Start slow as combining both fingers and pick playing at the same time will take some getting used to. Run over these exercises slowly and follow the notes step by step. You are aiming for consistency between the pick and fingers, you don’t want a huge volume difference between the two styles.

Owen Evans is an online guitar teacher based over in Manila, Philippines. He works as a professional teach for MGR Music Tuition, providing Skype Guitar Lessons to students around the world. Able to help students of all ages and abilities, Owen regularly teaches students based in Europe, North-America and Australia online – you can find out more about learning to play the guitar online by visiting https://mgrmusic.com. 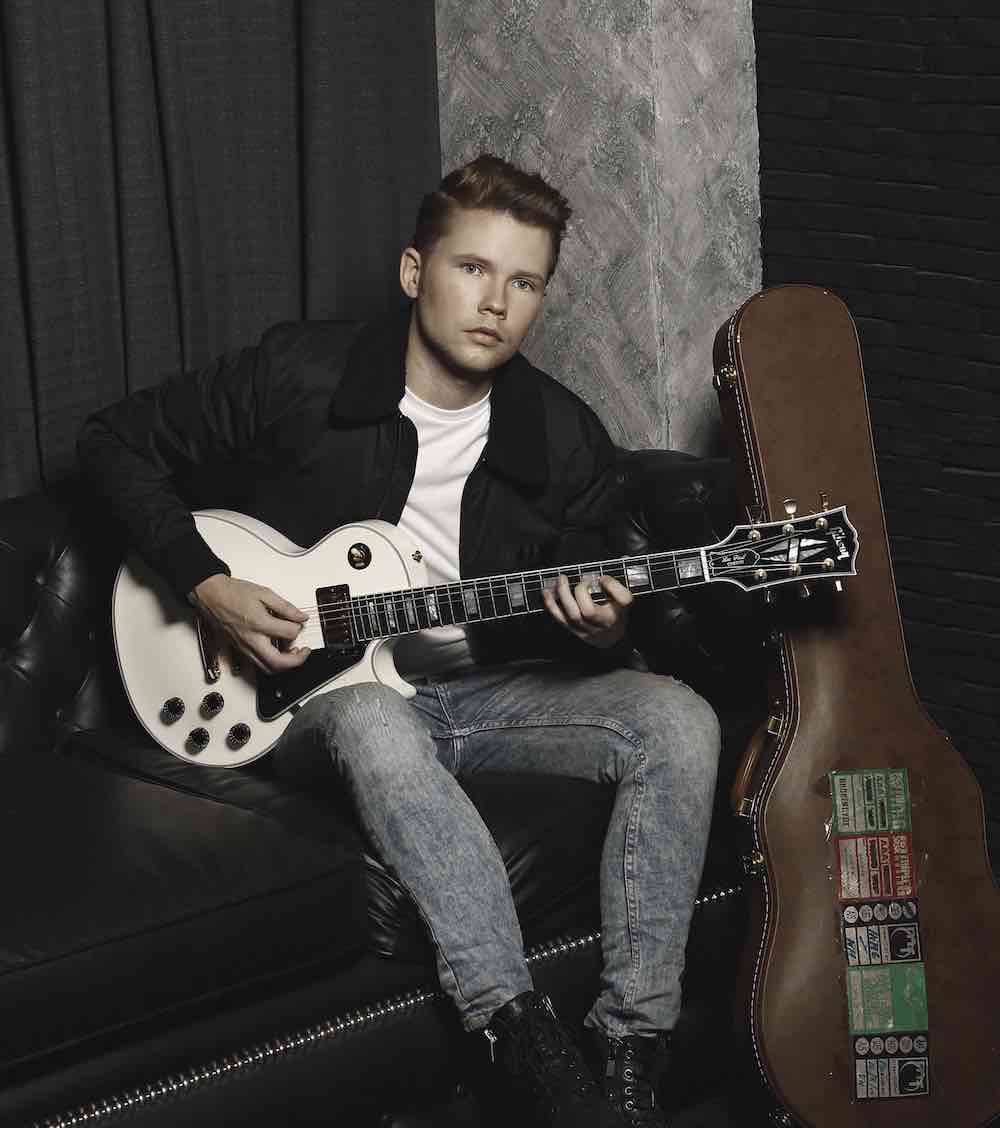