‘‘Music, at its essence, is what gives us memories. And the longer a song has existed in our lives, the more memories we have of it’ – Stevie Wonder

We know that musicians want to play the songs they know and love, the ones that hold memories. That’s why the song lists on our new Rock & Pop 2018 syllabus feature hundreds of well-known rock and pop songs, spanning all contemporary styles.

To help you get the most out of the new syllabus, we’re be bringing you Producer's Notes on a whole range of songs. Up this time is Stevie Wonder’s ‘Superstition’. 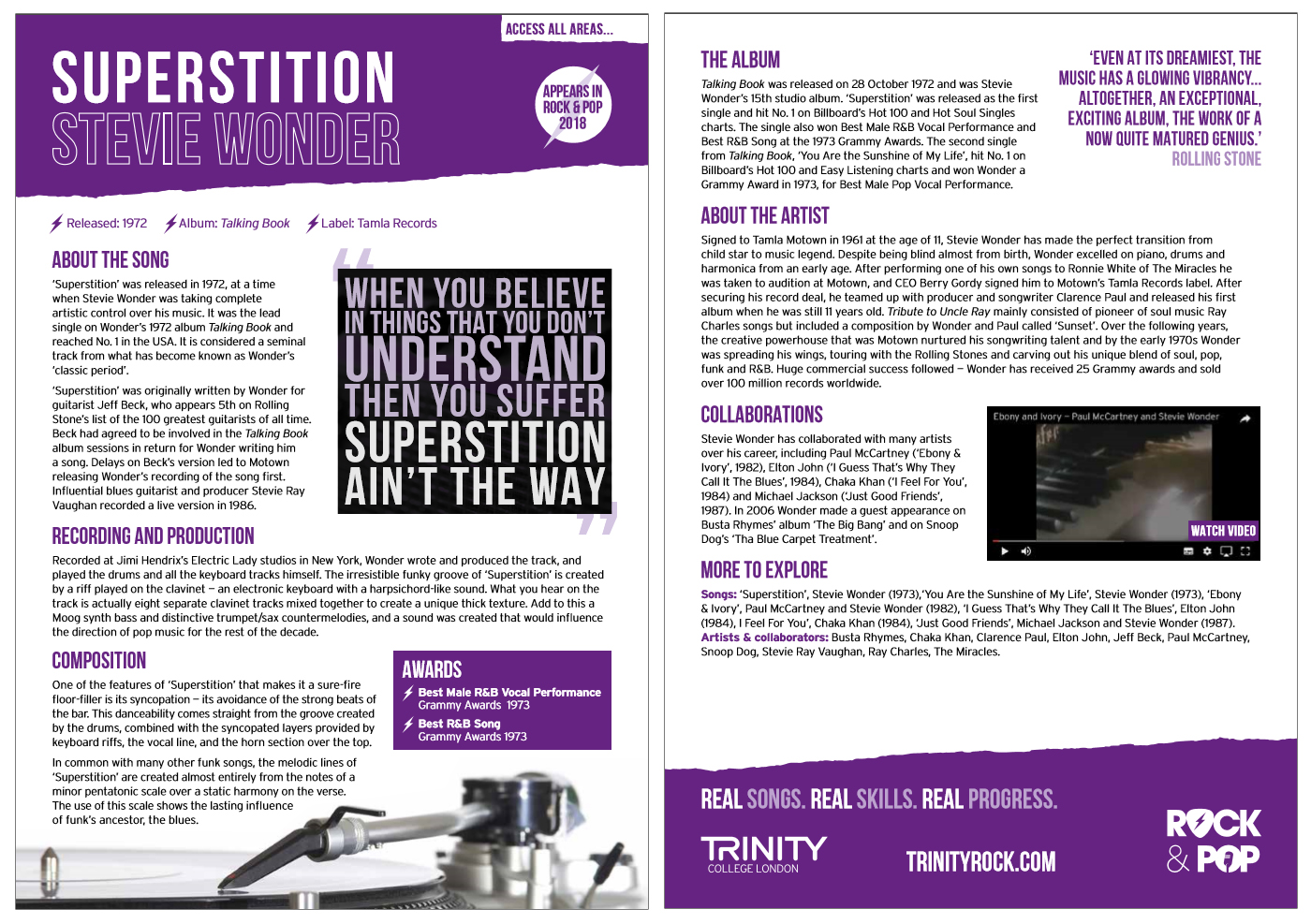 With notes on topics such as recording and production; composition; the album; and about the artist, these notes provide you - whether you’re a teacher working on the songs with one pupil or a whole classroom, or a musician learning with a teacher or playing the songs for fun on your own - with one place to go to get lots of useful and interesting information about the songs. Did you know, for example, that Wonder originally wrote ‘Superstition’ for guitarist Jeff Beck?

No. 1 in the USA charts; No. 74 in Rolling Stone’s 500 Greatest Songs of All Time; a Platinum selling record in the UK; featured in a range of films from ‘The Thing’ to ‘I, Robot’; covered by artists ranging from Quincey Jones to Macy Gray to The Jackson 5, and even warranting a special performance on the American children’s TV series Sesame Street, there’s no disputing that Stevie Wonder’s ‘Superstition’ is a seminal track.

Explaining why it was one of the hundreds of hit songs chosen to feature on the new syllabus, Rock & Pop 2018 consultant Chris Walters tells us that: ‘Stevie Wonder has won more Grammys than any other solo recording artist, and his prolific output has achieved both critical and commercial success. His music should be studied by all aspiring rock and pop musicians, especially if you’re interested in learning about soul and funk.

‘His music should be studied by all aspiring rock and pop musicians, especially if you’re interested in learning about soul and funk’

‘‘Superstition’ is one of Wonder’s most popular songs. It challenges you to play with precise rhythm and articulation at the same time as creating a ‘cool’ feel, achieved through playing very subtly behind the beat. Performing this song will help develop your ability to drive the groove while handling a large amount of musical detail’.